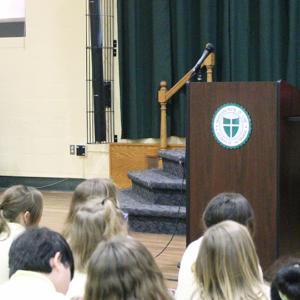 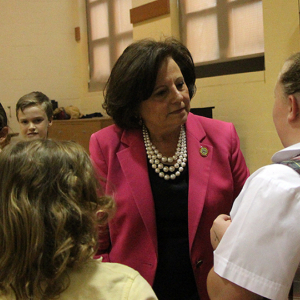 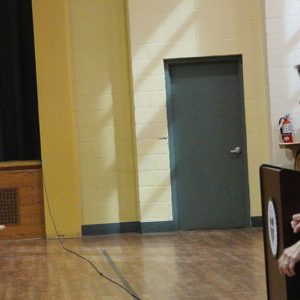 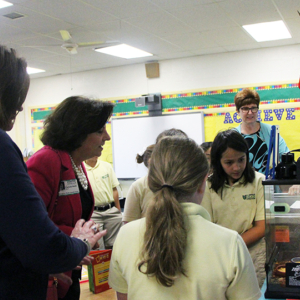 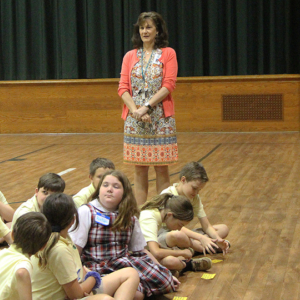 Fourth grade students at Monsignor Slade Catholic School have been studying Maryland’s state government and the history of Maryland from colonial times until the U.S. entry into World War II.  Prior to a recent Annapolis field trip, social studies teacher Mrs. Benitez encouraged her students to write letters to Maryland Senator Pamela Beidle (District 32). Senator Beidle is an alumna of Holy Trinity School, which is now named Monsignor Slade Catholic School in honor of the founding pastor.  She enrolled in the school for first grade, then graduated in eighth grade.  She spent her first high school year at the school, too, while construction on Martin Spalding (Archbishop Spalding) was completed.

Student ambassadors guided Senator Beidle on a tour through the school, pointing out new and exciting changes like the Discovery Zone and STEM Lab while enjoying stories Senator Beidle shared about her time as a student in the same classrooms.  She recalled taking algebra in the current 8th grade math classroom; told the students a story about her second grade class of 87 students; and surprised them with this fact: Monsignor Slade was not always a three-story building. (She attended 7th and 8th grade in the third story just after construction was completed.)

Following the tour, Senator Beidle joined the fourth grade classes for a question and answer session in the auditorium. As they politely peppered her with questions, she graciously answered and asked some of the students a question in response.  The students learned that her favorite subject was math and her favorite teacher, Mrs. Noonan.  Senator Beidle also shared that she did not dream of a career in politics but is very happy with her career and the opportunities she has had. The fourth graders have been discussing the passage of a bill into law in Maryland’s legal system; Senator Beidle was able to offer real-life insight on the process and specific examples of a bill’s passage or veto.

The students and Senator Beidle enjoyed a lively discussion about the state government, the Senator’s favorite hobbies, and what her experiences were like when she attended the school.  She seemed to recall that the uniforms were very similar and mentioned that she wore a jumper as a younger student, too. And they learned that the historical figure she would most like to meet is Martin Luther King, Jr. She believes “he was ahead of his time” and “we have so much more that we could have learned from him.” The fourth grade is very excited to see Senator Beidle again, and hopes she will return to the Monsignor Slade community often.